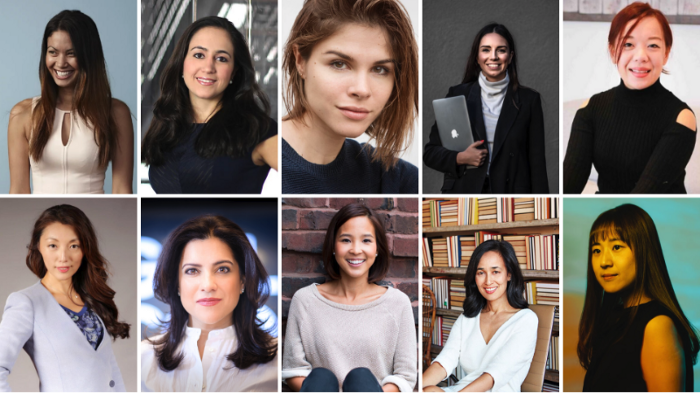 2019 was an amazing year for female founders who stand up for what they believe in and build amazingly successful businesses along the way. These ladies defy expectations, take exciting new ideas to market, and pave the way for the rest of us.

We rounded up the leaders, innovators, and entrepreneurs who inspired us the most this year.

As a teacher at the University of Western Australia, Melanie Perkins saw how difficult it was to navigate graphic design software. So she created Canva - the intuitive, user-friendly, free design tool that allows anyone to create professional-looking graphics.

Since launching the company in 2013, Melanie has created a network of over 15 million Canva users. Today, Canva is worth $2.5 billion with offices in Sydney, Manila, and Beijing.

Melanie’s story is proof that any female founder with vision and dedication can achieve incredible success on a global scale.

When she dropped out of high school, Cindy Mi believed that China’s educational system had failed her. So she started VIPKID, the cutting edge platform that connects teachers in North America with children around the world for real-time English immersion learning online.

Launched in Beijing in 2014, VIPKid is China’s leading online education startup with over 500,000 paying students and 60,000 teachers in the US and Canada.

Cristina Junqueira earned an Engineering Bachelor's degree and a Master's degree from Universidade de São Paulo (USP), and an MBA from Northwestern University’s Kellogg School of Management before setting out to redefine banking through Nubank.

The Brazil-based Nubank issues, administers, processes, and transfers payments related to post-paid credit cards and equity investment in other entities. Cristina was nominated as one of the most powerful women in Brazil by Forbes Magazine in 2016 and 2017, and in 2016, she received the most important female-focused award in Latin America, the Prêmio CLAUDIA, in the Business category.

Vickey Li immigrated to the U.S. from China at the age of 15. She graduated from the University of California, Davis with a double major in Global Agricultural Development and Economic Management. In 2017, Vickey leveraged her seven years of experience in commercial real estate to found OnePiece Work - an innovative co-working space and cross-border incubator founded in the heart of Silicon Valley.

Since then, OnePiece Work has expanded to eight locations in the U.S. and China and gained the attention of global brands like Mitsubishi, Seiko, Samsung, Google, Osaka City, Fukuoka City, The United Nations, Bank of Negara, Deutsche Bank, and many other trusted organizations from all over the world.

Vickey has lived and worked in cities all over the world - an experience which has inspired her to bring many cultures together in one place. The OnePiece Work community is a direct reflection of her vision, with entrepreneurs, investors, and employees whom uproot themselves from their own countries coming together to explore new ventures in new cities.

Emily’s passion for beauty and grooming routines inspired her to create a blog in 2010 while she worked a day-job in fashion. Today we know her as the founder of direct-to-consumer beauty products retailer Glossier - currently valued at $1.2 billion. While the paradigm-shifting beauty brand achieves record growth, Emily still maintains control as its visionary founder & CEO.

Emily’s success is a reminder that even the most accomplished female founders come from humble beginnings.

Jana Bobosikova is living the American dream. As a native of the Czech Republic, Jana gained experience building brands in Europe. When her work caught the attention of beauty giant Sephora, it was time to bring her talents to the US.

Since arriving in Los Angeles, Jana has founded Epic Brands, which helps beauty, skincare,  and other smart products connect with audiences through seamless transactions that empower lives.

Epic Brands plans to continue its growth by focusing on the investment side of match-making early-stage ventures/opportunities with smart capital.

With over 1,500 meditations and audio therapy sessions, Simple Habit is a mental wellness platform that helps busy people reduce daily stress. Simple Habit was born when Yuhna Kim left a job on Wall Street to build her first start-up. Desperate to manage the extreme stress of the process, she turned to meditation.

Yuhna began to meditate for a few minutes a day and saw dramatic improvements in the quality of her work, relationships, and life. In 2016, she decided to build Simple Habit to help busy people like herself experience the benefits of mindfulness.

Yuhna’s success at turning her passion into a successful business is an inspiration to female founders everywhere.

Reshma Saujani began her career as an attorney and activist. In 2010, she surged onto the political scene as the first Indian American woman to run for U.S. Congress. During the race, Reshma visited local schools and saw the gender gap in computing classes firsthand, which led her to start Girls Who Code.

GWC’s mission is to equip and inspire young women with the skills and resources to pursue opportunities for a computer science education. GWC pairs instruction in robotics, web design, and mobile development with high-touch mentorship for young women.

More than just an inspiring female founder herself, Reshma had made it her mission to equip the next generation of female visionaries.

Minted uses technology to allow consumers to discover creative talent, making Minted a place where artists can learn, gain exposure, and build their business. Founder and CEO Miriam Naficy started the online design marketplace during the 2008’s recession, when she realized that people were leaning towards artisanal products and services… and away from big brands.

Today Minted employs nearly 400 people and generates hundreds of millions of dollars in annual sales. Last year, Naficy earned more venture-capital funding than any other female entrepreneur, bringing in a whopping $208 million round.

Beidi Zheng is a passionate entrepreneur and an inspiring leader. With years of investment banking and business development experience at large corporations such as Nomura Securities, Goldman Sachs, Merck, and Sanofi, she successfully founded three companies in the cross-border education and travel industries, as well as a private equity investment. She is currently Chairwoman of FlyHigh Group, an HR technology firm, as well as serving on the board of Berkeley Haas School of Business Alumni Network. Beidi holds an MBA from Berkeley Haas and a bachelor’s degree from Tsinghua University.

Beidi and her founding team all experienced the pain of trying to land a dream career after graduation, so they were extremely motivated with a strong sense of mission to help other international students find the right career opportunities. This mission resonated with the niche market of companies with multicultural talent needs. Thus began the journey of FlyHigh.

FlyHigh has been a traditional recruiting firm in the niche market of multicultural talent.  Having collected massive data on both sides of the recruiting process, as the next step, Beidi and her founding team generated a vision to offer a full spectrum of HR solution packages to solve the pain points of hiring staff and job seekers.

These ladies just scratch the surface when it comes to the amazing and accomplished female founders who are building their start-ups around the country and around the world. We can’t wait to see what 2020 has in hand for female entrepreneurs worldwide. We can say with confidence that it feels like the future is in great hands.